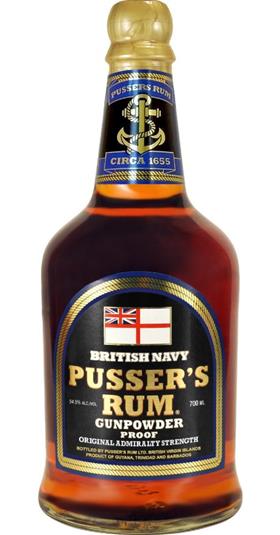 In 1979, Charles Tobias entrepreneur and adventurer sought to resurrect the Pussers Rum tradition. He obtained the rights and all the blending information from the Admiralty, and formed Pussers Ltd. on Tortola in the British Virgin Islands and began bottling and selling this historic British spirit in 1980 to the public for the first time. British Navy Pussers Rum is the same Admiralty blend of five West Indian rums, still produced in exact accordance with the Admiralty’s specifications for rum including an oak wooden still first first used over 200 years ago, the flavours from the still have a huge impact on the flavour, smoothness and colour of Pussers. Bottled at Navy strength 54.5% ABV. Clear and bright, deep copper red. Powerful nose of molasses, treacle and toffee, with lighter notes of honey, oak and warm spices. Full rich taste, distinctive mellow mixture of flavours- deep molasses and treacle with aromatic nutmeg, cinnamon and toffee notes